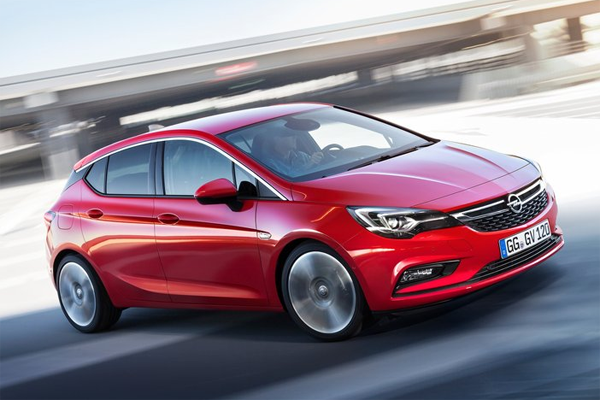 Sales of compact cars have stalled in Q2 of 2015, as the segment is up just 4% at the end of the first half. This is down from +10% after Q1 and just half of the overall market growth of 8% so far. That said, the Volkswagen Golf, traditional leader of the segment and the overall market, is up just 2% but remains unchallenged by a large margin. VW dealers still sell more than twice as many as their nearest competitor, the Ford Focus. After the Focus had to fight for its second place in the first quarter, with the Skoda Octavia outselling it in January and February, the facelift has given the Ford some renewed sales energy. It’s taken some distance from its Czech rival, which is now also challenged by the Peugeot 308, up 34% on last year. The 308 narrowed the gap to the Octavia to less than 200 units in June, while the Opel/Vauxhall Astra managed to outsell both of them that same month thanks to heavy discounts on the outgoing model as the new generation has just been revealed (pictured). The Seat Leon seems to be plateauing, with Q2 sales up less than 100 units on the same quarter last year, when the new generation was still squeaky fresh. Year-to-date, its improvement is down to 10%, from +23% after Q1. That leaves it vulnerable to the Renault Megane, which is due to be replaced next year and will be increasingly discounted as the year comes to an end. Anybody dare to predict which of these two will come up on top by the end of the year?

Similarly, the Mazda3 was up 37% in Q1, but down in Q2 when the new generation had just been released. Its improvement is down to 18%, and will continue to deteriorate the rest of the year. That may give the Nissan Pulsar a chance to close in, as that model is 4 months fresher than the Mazda.

Next year, Suzuki will re-enter the segment with a familiar name: Baleno, which will be revealed at the IAA Frankfurt Auto Show next month.

Notice we’ve moved the Citroën C4 Cactus from this segment to the small crossover segment upon advice from some of our readers.

Also check out the premium compact & small car segments, where the Audi A3 and Mini hold on to their respective top spots.

Car Sales by Brand (US)

Welcome to CarSalesBase, your destination for global automotive sales data, analysis and commentary. We collect and organize vehicle sales figures from across all the major automotive manufacturers, brands and countries. We hope you enjoy.

Start typing to see results or hit ESC to close
Car Sales China China by Model sales Car Sales US Car Sales Europe
See all results
This website uses cookies to improve your experience. We'll assume you're ok with this, but you can opt-out if you wish. Cookie settingsACCEPT
Privacy & Cookies Policy

Any cookies that may not be particularly necessary for the website to function and is used specifically to collect user personal data via analytics, ads, other embedded contents are termed as non-necessary cookies. It is mandatory to procure user consent prior to running these cookies on your website.